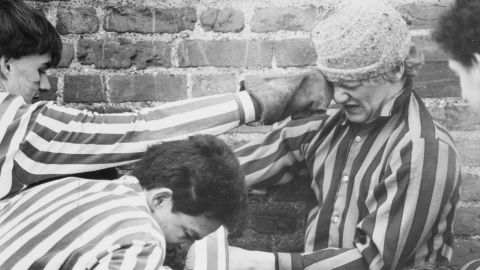 The mystifying title of this book is better explained by its sub-title, “Early Public School Football Codes”.  It consists of 21 chapters, each describing the history of football in a single school.  Most start with the earliest discoverable references to any suggestion of any game of this nature, and conclude either at the present day or at the time when a school adopted a national code in preference to its own version.

There are fascinating similarities in how forms of football emerged within entirely separate communities, usually with rules reflecting the environment in which the games were played.  Most were brutal in nature and many characterised by the feature to which the book’s title refers – an amorphous, scrum-type assembly, confined around the ball to advance its progress.  Some had defined playing numbers and locations: others involved most members of the school simultaneously.  In the majority of schools, these games withered through the later 19th century, once “football” had been through a national process of codification, which led to the two distinct and separate brands of “Association” and “Rugby”, each with its National Governing Body and emerging competitions.   The desire of schools to compete with each other, and of their old boys to continue playing, required these widely accepted forms of the rules.

In the majority of schools featured, the adoption of a nationally codified form of the game led to the gradual elimination of the local code.  There are, however, notable exceptions.  Eton, Harrow and Winchester, amongst others, still retain their unique and historic forms of the game for internal competition, and deploy accepted versions alongside them for external matches.

Some of the accounts are, inevitably, more compelling than others.  David Ray’s description of the game at Rugby School is a particular highlight.  There can be a certain similarity of story between schools, which is maybe unsurprising as they are all telling variations of the same tale, based at a similar period in history.

This is a niche book, which will be appeal to readers with interest in the history of all forms of football, and the considerable influence which the public schools had in elevating these pastimes to the carefully structured, worldwide games that they have become today.