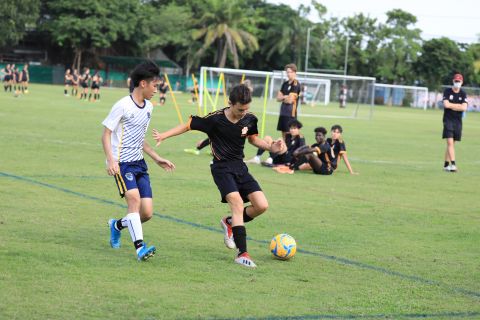 I have been questioned a few times as to why our coaches are quiet on the sidelines as opposed to some of the other coaches we play against in fixtures and tournaments. I would like to take this opportunity to offer some insight and hopefully give some clarification on what may be occurring.

Over many years of observing my wife drive she will often listen to music, the radio or a podcast she then goes about singing along or offering her thoughts on what she is listening too this was always the case until she gets lost or needed to park, as soon as something random that is not autonomous comes up she immediately turns the radio off. At first, I thought it was quite sweet and never really questioned why this was happening, until one day I asked her why she had just turned the radio off - she told me to “shut up” and proceeded to park. After she parked I asked her again and she said that having no noise helps her concentrate without distraction. This is something that has stuck with me.

Loud during the week, quiet at the weekend

My previous job before arriving here was working with elite players back in the UK in a Premier League academy my old boss Paul ‘Noddy’ Holder had a few clear maxims that he expected from his coaches one was to be “Loud during the week, quiet at the weekend” this something that I have brought with me to my role here at Bangkok Patana School.

In training I have asked our coaches to be loud and reinforce the key messages from that session's topic (similar to a learning outcome within a classroom), they should take the time to speak to individuals, small groups and everyone. We should be descriptive and prescriptive setting the highest standards using age-appropriate but technical language.

In match scenarios, I have asked our coaches to observe and offer positive reinforcement  whilst adding in “reminders” only when required. I have asked them to control their emotions and certainly never raise their voice into a shout only their “coaching voice”. On occasions especially during festivals for the younger children in our programme, I have asked them to observe from afar, giving the players opportunities to learn, play and make mistakes with absolutely no fear.

To remind and not chastise

Reminders come into play when a young player continues to make the same or a similar mistake over and over again, in this instance, I have asked the coaches to offer some guidance on how to get out of that predicament. This should always be done calmly and fairly without showing any frustration or exacerbation. They should address the child by name first (so they know you are talking to them) and offer clear and concise information.

Reminders also come into play when one of our players are not representing our school appropriately or not displaying the right levels of commitment, hard work and attitude. Some children require these reminders more than others!

In my experience, I have found that during match situations (playing against external teams) young players have far too much to think about without having to respond and act out what adults on the sidelines are asking them to do.

This is their opportunity to show their learning.

This is their opportunity to succeed or fail (both are fine).

This is their opportunity to play the game, after all, it is their game.

As coaches and parents, it is our job to help the children learn and improve and the best way for them to do so is making their own decisions.

Shouting “SHOOT” when a young player is near the goal may make them change their original decision, it may put them off completely or they may indeed shoot and score. What you as a parent might not realise is we have been working on “creating off the ball”, asking players to scan for their teammates and pretend to shoot before playing a through the pass. If the player was to shoot we have lost our opportunity to observe their learning.

Everybody hears but not everyone is listening

In one of my previous roles within the Football Association in England, we did a small anecdotal test to see if people can listen and understand what going around them whilst doing a task. We asked two coaches to stand eight metres apart and they had to play a game of “one-bounce” which is a game where they had to pass the ball to one another but they could only touch it once and it had to bounce once (harder than it sounds). While they were doing this the other coaches would shout out football-related commands “PASS” “SHOOT” “TACKLE” when this happened the player's performance dropped, they lost their rhythm and either required more than one touch or more than one bounce, We put them off, we became the car stereo.

Whilst doing the same task we set about shouting random words for a minute, (again they struggled to complete the task but did manage to keep going for a minute) we then asked the players to recount the words that were shouted whilst they were “busy” they got 2 out of 15 right - one was their name and randomly the other word was pig.

This went further to reinforce that shouting from the sidelines had a detrimental effect on performance and the performers are hearing but not listening!

We were recently playing a fixture against another school and I observed their coach who is a genuinely lovely bloke, who cares so much about his players improving quickly he feels he has to help them get to their destination ahead of time. During the match, their goalkeeper had the ball at his feet and tried to select a pass to one of his teams mates feet, on two or three occasions we managed to intercept the ball and have an opportunity to score. In the lead, up to these mistakes (learning opportunities), the coach told the goalkeeper to pass and unfortunately, the player failed to execute. The coach was exacerbated and child felt exposed - after the seventh time of trying the goalkeeper did play an excellent raking pass to one of his teammates who then went on to create a goal. This was the highlight of my afternoon and I was excited to hear the positive feedback from the coach instead the coach queried ‘Why couldn’t you do that the last six times” my heart sank and it further reinforced that what we are doing is the right thing for the young players in our care.

My father has often said to me “there is a reason you have two ears, two eyes and only one mouth” this is something I have passed onto our coaches.

In speaking with Mr Mills around this topic he offered this quote by Robert Tew - “You are always responsible for how you act, no matter how you feel” and we collectively urge our wonderful parent community to look and listen before offering anything other than positive feedback.