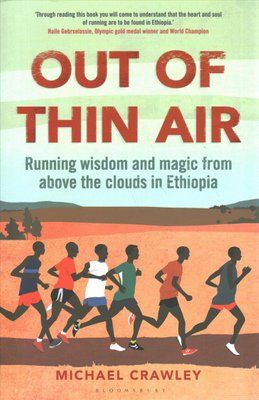 This is a study of the community of long distance running in Ethiopia.  The author is a competent athlete, who spends over a year living and training at high altitude amongst the country’s runners, in an attempt to better understand the culture of the sport in the nation.

It is clear, from an early stage, that for most runners, the sport is the potential exit route from poverty and the lifestyle of one of the world’s poorest countries.  Those athletes who are able to compete abroad, and succeed on the world stage, return with life-changing riches, and provide role models for the next generations of athletes.  This explains why there are so many aspiring competitors, who train in large groups in different parts of the country.  Many receive very basic funding to allow them to train full time, and their dedication and commitment to the frequent long, hard sessions reflects the significance of the prizes on offer.

The training regimes are described in some detail. Perhaps predictably, they are extremely demanding, usually conducted in the very early morning to avoid the heat, and at a range of high altitudes.  Facilities are basic, and most sessions conducted in forests and on roads, with very occasional excursions to the country’s one athletics track.  The volume of running is large, but some of the practices of running in groups would be unusual to western athletes, though reflected in the performance of Ethiopians on the world stage.

There is a curious tension between modern training methods and enduring traditional beliefs in the contribution of spirits to athletic success.  The author attempts to understand, and explain, how historic attitudes influence training and competition behaviour.

Inevitably, the book finishes with the contrasting athletic – and therefore economic – fortunes of the principal figures from the author’s training group.  A few achieve life-changing success in overseas distance races: many recognise that they will never quite make this, and drift away from the punishing training regimes.

This is a book that will be of interest to runners, and those with curiosity about how East African countries come to dominate the world of distance running.  Its appeal to more general readers will be more limited.